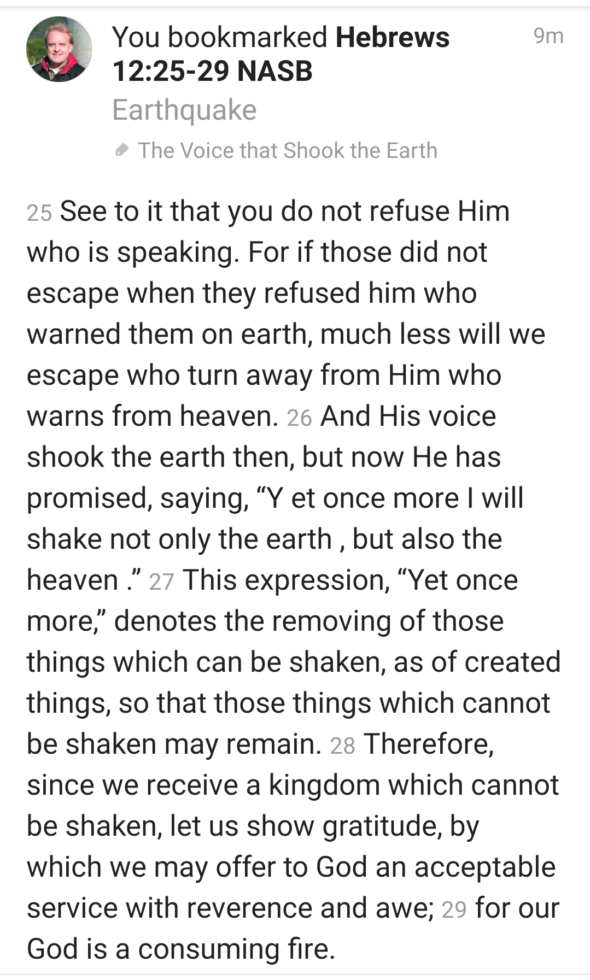 Today’s reading reminded me of all the recent earthquakes, not just here in America, but all around the world. They are devastating, as are tornadoes, fires, & floods. These and other dangerous forces of nature and natural phenomenon, like hail & sinkholes, are not new to us.

We read about a flood in the story of Noah, a fire in the story of Lot, a tornado in the story of Job, hail that fell on Egypt, a sinkhole that swallowed up the rebels in the congregation of Israel, all leading up to the “big one,” the earthquake during Jesus’ resurrection.

So, yes, in the words of the Preacher in Ecclesiastes, ” … there is nothing new under the sun.” Speaking of the sun, of which the Preacher says, “.. it rises and sets and hastening to its place it rises there again,” we read about the day that the sun stood still in the story of Joshua and about the three days that the sun did not shine just before Israel’s exodus from Egypt.

Ever since we were kids, we’ve been reading all of these amazing stories about nature under God’s control, and others like the Red Sea parted, the Jordan River parted, and the Sea of Galilee calmed.

During our stay on earth, we will experience hail, fires, floods, tornadoes, sinkholes, and yes, earthquakes. So, let’s listen to the voice that shook the earth. Let’s make sure that we are citizens of the kingdom which cannot be shaken, and that is the Kingdom of God.

“San Andreas” is an intense, action-packed, disaster movie about an earthquake. Dwayne Johnson stars in the movie, and in a recent article published in Pure Flix Insider, he is listed as one of “18 Christian Celebrities Who Are Changing Show Business.” Six months after the release of the movie, he shared his faith in God in an article in Christian Today. I appreciate celebrities like Dwayne who take advantage of the opportunity to deliver a message of faith & hope to their fans.