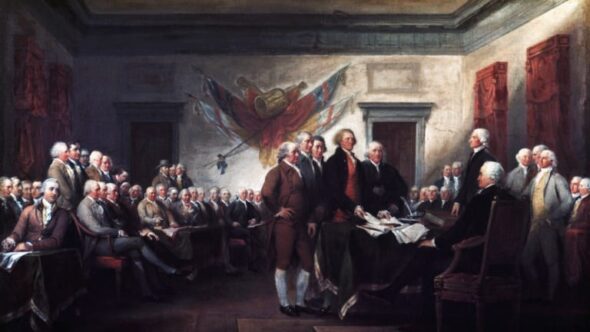 During my walk, I listened to “Prisoner of Hope,” by the Gaither Vocal Band. The word “prisoner” just doesn’t seem appropriate on this day that celebrates our nation’s declaration of independence. I started to think about other words, like friends & foes, enemies & allies, victory & surrender, and war & peace. These are the words that you typically hear during a conflict, like the American Revolutionary War.

God is Love
Friends of the world can end their war with God by accepting His terms of peace. Jesus offers, not the world’s peace, but His peace (i.e., reconciliation with God) (John 14:21-27 & Romans 5:1-11). God’s peace treaty requires full surrender to His authority, which is demonstrated by obedience to the Gospel and faithful service to Jesus, the Prince of Peace in the Kingdom of God.

In His sermon on the mount, Jesus stated, “Blessed are the peacemakers, for they will be called sons of God.” (Matthew 5:9) Will we be called sons (daughters) of God? Are we helping others to reconcile with God? Are we saving souls from death and covering a multitude of sins by turning them back who have strayed from the truth? (James 5:19-20) Are we speaking the truth in love? Or, are we instead hearing Satan whisper, “Just be friends,” and following his advice?

I love you!
Dad

Here is a classic hymn about ending the war with God & accepting His terms of peace. Check it out, “I Surrender All”:

And, I’ll never forget singing this favorite hymn at Grandpa Hall’s funeral. Check it out, “Victory in Jesus”: